Your Check Engine Light is on and you find a P0420 code for a catalytic converter fault. Does that really mean your converter has reached the end of the road and needs to be replaced? A new converter can cost $600 to $1000 or more if a new car dealer or repair shop does the job, or maybe half that amount if you do it yourself. It’s an expensive fix that may or may not be necessary. The problem, in most cases, is an emissions issue, not a performance issue that affects the way the engine runs.

A P0420 diagnostic trouble code is a “generic” fault code that is set when the Onboard Diagnostic II (OBD II) system sees a drop in converter efficiency. The OBD II system monitors catalyst efficiency by comparing the switching activity of the upstream and downstream oxygen sensors in the exhaust. The upstream O2 sensor in the exhaust manifold reflects the condition of the exhaust gases as they exit the engine. The downstream O2 sensor in or behind the catalytic converter reflects the condition of the exhaust after it passes through he converter.

The catalytic converter is like an after-burner. It oxidizes (burns) any residual fuel vapors (unburned hydrocarbons or HC) in the exhaust. It also burns any carbon monoxide (CO) in the exhaust. The exhaust must meet federal emission standards, and if a problem exists that causes emissions to exceed the federal limits by 150%, the OBD II system is supposed to catch the fault, set a code and turn on the Check Engine light.

The OBD II system can’t actually measure the concentration of HC or CO in the exhaust, so it compares the upstream and downstream O2 sensor readings to estimate how well the catalyst is actually doing its job of removing pollutants from the exhaust.

The upstream O2 sensor will typically show a lot of switching activity because the engine computer is constantly adjusting the fuel mixture between rich (more fuel) and lean (less fuel). When the engine is first started, the catalyst is cold and doesn’t do much. During this time, the switching activity of the upstream and downstream O2 sensors are essentially the same because nothing is happening inside the converter.

When the converter reaches about 600 degrees F, it is hot enough to start reacting with the gases in the exhaust. This is called the catalyst’s “light off” temperature. The converter now starts to clean the exhaust and remove the pollutants. This causes a sudden drop in the switching activity of the downstream O2 sensor, and the sensor’s output voltage levels off to an average reading of around 0.45 volts. This tells the OBD II system that the catalyst is doing its job and that everything is fine.

Does this mean the converter has failed and that the vehicle is polluting? Not necessarily, but technically speaking the vehicle is NOT in emissions compliance if it has a code and the Check Engine light is on.

Most states now use a quick OBD II plug-in test to check emissions compliance on 1996 and newer vehicles. 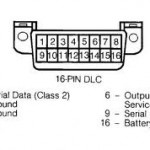 The plug-in test is faster, easier and cheaper to do than a loaded mode tailpipe emissions test on a road simulator or dynamometer. The rules in most states say to pass the OBD II plug-in test, the vehicle (1) must have a fully-functional OBD II system (Check Engine lamp works and the diagnostic connector communicated with the engine computer), that the Check Engine light must be off (not commanded on), and that there are no current codes in the computer’s memory.

Consequently, if the Check Engine light is on and you have a P0420 code or any other code, you will FAIL the test — unless the state allows you to take an alternate tailpipe emissions test to see if your vehicle is actually polluting. Some states allow this but others do not.

If your state allows an alternate tailpipe test — and your car passes — don’t worry about the converter code. Your OBD II system may be over-reacting to a perceived emissions problem that does not yet exist.

Every vehicle manufact. determines the cutpoints at which various codes are set as part of their emissions compliance testing that is required to achieve emissions compliance for a new vehicle. Some set their cutpoints a little conservatively to minimize the risk of an emissions recall. In other words, they would rather pull the emissions trigger sooner rather than later if a potential emissions problem is developing in a vehicle. Consequently, the converter may not be operating at peak efficiency but is still functioning well enough to pass an actual tailpipe emissions test. The exact point at which the light comes on may be when catalyst efficiency drops to 96%, 95%, 92% or what ever number the vehicle manufacturer’s tests have shown it adversely affects emissions. The law requires the light to come on if emissions exceed the limit by 150%.

Why did the converter go bad? Under normal use, converters are engineered to last upwards of 150,000 miles. But any number of things can make it fail prematurely. The most common cause is contamination of the catalyst because the engine is burning oil or leaking coolant internally (leaky head gasket or a crack in a combustion chamber or cylinder). Converters can also be damaged if they overheat due to ignition misfiring that allows unburned fuel to pass through into the exhaust (check for a fouled spark plug or bad plug wire). The same thing can happen if the engine has a bad exhaust valve that leaks compression into the exhaust (check compression).

Okay, back to the P0420 code and the Check Engine light. If you live in a state that does not allow an alternative tailpipe test if your vehicle fails an OBD II plug-in test, you’re screwed. You have to fix the fault to turn out the light and pass the test. That means replacing the converter even if it is marginal or still functional.

The only way to accurately measure converter operating efficiency is to sample the exhaust gases ahead and behind the converter with an infrared exhaust analyzer. These are professional grade machines that cost from $2,400 for a basic hand-held 2-gas analyzer up to $4,400 or more for a 5-gas model. Operating an exhaust gas analyzer requires a good understanding of the various exhaust gas readings and what they mean, so it’s not something that is within the ability or budget of a typical do-it-yourselfer. The only other alternative is to take your vehicle to a new car dealer or repair facility that has an exhaust analyzer and have them test your converter for you (which will likely cost $100 or so for the test).

You’re probably wondering why you can’t just clear the code just prior to taking the emissions test. First, disconnecting the battery on a late model vehicle with OBD II usually does NOT clear the code — and can mess up a lot of calibration settings that can have an averse effect on driveability until the computer “relearns” the settings. And on some vehicles (like Chrysler Minivans and certain European luxury cars), disconnecting the battery can disable the climate control system and audio system in the vehicle.

What about using a plug-in scan tool or scanner software to clear the code and turn off the Check Engine light? This is the safe way to clear codes, but the catch is you’re car will not be allowed to take an OBD II plug-in test until all of the required monitors have run — 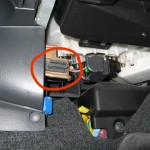 picture of a OBDII port location underneath the steering wheel

which means you have to drive it until the catalyst monitor runs. If the problem is still there (which it likely will be), the code will reset and the Check Engine light will come back on. Now you’re right back to square one.

So what’s the fix? I hate to say it but you’ll probably have to bite the bullet and replace the converter. Aftermarket converters are less expensive than OEM converters, and installing it yourself will save even more money. It’s a difficult job because you have to get the car up off the ground (always use safety stands or ramps, not just a jack) and you’re working on your back. What’s more, the bolts that connect the converter to the exhaust will likely be rusted solid, so plan on a lot of sawing, pounding, chiseling and swearing. Also, make sure the new replacement converter is “OBD II compliant” and is the same type as your original converter. Don’t waste your time trying to install a used converter because there’s no way to know what condition it might be in.

Removing the converter and replacing it with a piece of straight pipe doesn’t work either because the OBD II system will pick that up right away. So will a visual inspection under your car. You may also be fined for “tampering” if you’re caught.

Worst case scenario: you replace the converter with a new one, drive the car and Check Engine light comes back on. The P0420 code has returned. Now what? This kind of situation can be prevented by doing some additional diagnostics and research BEFORE your replace the converter.

If the downstream O2 sensor is bad (heater circuit not working, loose or corroded wiring connector, contaminated sensor element, etc.), the OBD II system should detect the fault and set an oxygen sensor code. The same goes for a bad upstream O2 sensor. In either case, the presence of an O2 sensor code should prevent the catalyst monitor from running and setting a false P0420 code. Of course, this is ideally speaking and nothing is ever ideal. Sometimes a faulty O2 sensor is not bad enough to set an O2 sensor code but is off just enough to affect the accuracy of the catalyst monitor.

To minimize this risk, it’s a good idea to check the operation of the O2 sensors with a scan tool or scanner software. You should see normal switching activity in both sensors shortly after the engine is started, with the O2 sensor voltage switching back and forth between rich (over 0.8 volts) and lean (less than 0.3 volts). A flat line O2 sensor reading or one that shows little switching activity is a bad sign. The downstream O2 sensor should slow down and go flat when the converter lights off (if the catalyst is working). If it keeps on switching like the upstream sensor, it tells you the catalyst is probably bad and the converter needs to be replaced.

You should also inspect the exhaust system and converter for leaks. “False” air can enter the exhaust through leaks and upset the O2 sensor readings, causing them to read leaner then normal.

Also, you need to do a little research. Check with a new car dealer or search online for any technical service bulletins that may relate to your problem. In some cases, a “reflash” of the engine computer may be required if the vehicle has a history of being overly sensitive with the catalyst monitor.